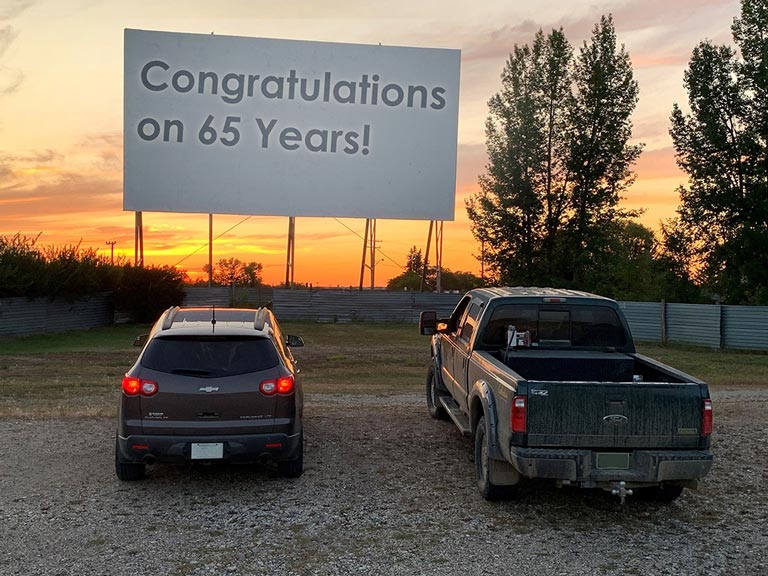 Join our Western Financial Group Watrous branch as we toast the Jubilee Drive-in for 65 years spent entertaining our community, and a second anniversary, 100 years of relaxing on Manitou Beach.

Both tourist and resident favorites, these hot spots, along with the historic Danceland hall with its horse hair dance floor, have a long history spent bringing people to this special part of Saskatchewan.

“Congratulations on all the hard work you’ve done over the years and the hard work that continues to be put into the community of Manitou Beach,” Melissa Harding, Assistant Branch Manager, said.

Tourism at Little Manitou Lake and the village began in the early 20th century — its saltwater having healing properties. One thing is the same; it’s a must visit destination with good memories for many.

“When I was 12, I swam across the lake,” she said, reflecting on all the glory that went with it.

As for the Jubilee Drive-in, this local staple is also tremendous for the region. Having grown up in Watrous, Harding recalled movies under the stars — often spent on a lawn chair in the bed of a truck.

“Now that I have my own kids, I’m bringing them to the drive-in and getting that experience that you won’t necessarily get sitting in a theatre,” she said, adding they often catch some rays at the beach too.

At Western Financial Group, we live and work in the communities we serve — taking part in events, as well as enjoying local attractions is engrained in all our branch locations. We’re community champions.

“It’s very important to be involved and support community efforts,” she said.

Congratulations to the Village of Manitou Beach and the Jubilee Drive-In.