Why are Canadian farmers worried about the carbon tax? 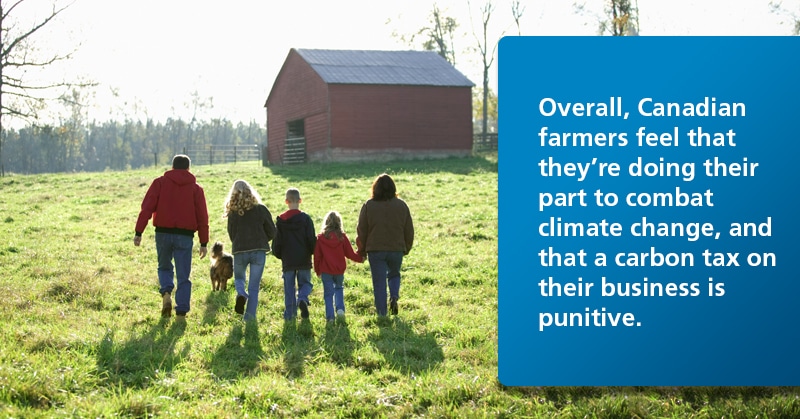 You’ve most likely heard that the Canadian government has imposed a carbon tax plan on all provinces and territories to reduce carbon emissions.

The carbon tax will be charged to any individual or business that uses carbon-based energy such as natural gas, diesel and gasoline. The tax or fee is charged for every one tonne of greenhouse gases (GHGs) that is emitted into the atmosphere.

The concept of putting a tax on carbon emissions to encourage companies to invest in cleaner technologies and adopt greener practices is not new. Other countries have implemented a carbon tax with notable success. For example, Sweden has used a carbon tax since 1991. The Swedish Ministry of Environment estimates that the carbon tax has been instrumental in cutting emissions by an additional 20% (as opposed to relying solely on regulation.)[1]

The Canadian government’s carbon tax plan requires provinces to meet a minimum federal price on carbon of $10 per tonne in 2018, rising to $50 per tonne in 2022. The provinces have until 2018 to implement their own policy. B.C. and Alberta have already implemented a carbon plan.

Why are farmers concerned about the carbon tax?

Since the weather has a huge impact on their business, it is fair to say that there are few businesses as concerned about the climate as farmers. Why then are Canadian farmers worried about the government’s plan to tax carbon pollution in an effort to promote cleaner technologies and combat climate change?

There are two main reasons: shrinking profit margins and the dilution of global competitiveness.

Farmers anticipate that the price of inputs needed to operate their business - from seed and crop protection products, to parts and machinery, to shipping - will increase due to the carbon tax their suppliers must pay.

The cost of electricity, required for heat, irrigation and seed cleaning, is also expected to increase.

Fertilizer is an area of concern. In Alberta, both urea and anhydrous ammonia are produced using natural gas, making production subject to the carbon tax. While they prefer to buy locally, if farmers can’t afford to buy Alberta-produced fertilizer, they may be forced to find better deals on imported fertilizer. Fertilizer from outside the country requires transportation, which does little to reduce the farmer’s carbon footprint.

Agriculture is typically a low-margin business. Primary producers don’t set their prices, so they can’t pass along those increased supplier costs. Rising costs of the inputs required to run a farm business have to come out of the already-thin margins.

Soil protection and the climate has been a concern for the Canadian farming industry for several years. Many farms already employ environmental practices like zero-till seeding and using trees as windbreaks. Their farms are as energy efficient as possible.

Some animal producers are looking into a technique called “adaptive grazing”, which attempts to raise the largest number of animals on the smallest amount of land for the shortest amount of time to give the land enough of a rest period to re-grow and pull carbon into the roots and soil.

Overall, Canadian farmers feel that they’re doing their part to combat climate change, and that a carbon tax on their business is unfair punishment.

There are carbon rebates available for farmers to assist producers with the purchase of:

In addition, the carbon levy does not apply to dyed diesel or gasoline used in farming operations.

British Columbia introduced its carbon tax in 2008. In 2013, a five-year review found that the province's agriculture industry did not suffer any negative trade impacts because of the carbon tax. Time will tell how the Canadian farmer fares over the next five years.