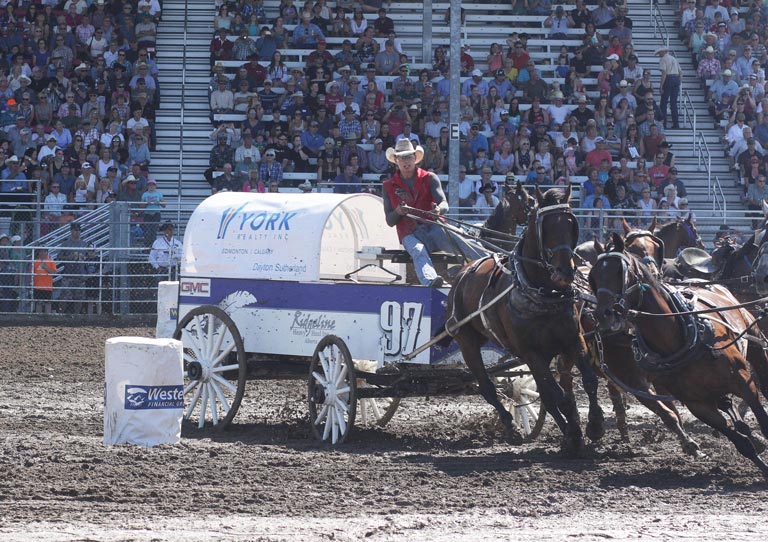 At the sound of the horn, chuckwagons will thunder around the barrels and storm the track — we can’t wait for the 2019 World Professional Chuckwagon Association (WPCA) Pro Tour.

Excitement levels are already high. This year, teams from Western Financial Group’s network are celebrating the fourth year of our strategic partnership with the fan-favourite WPCA.

Western brokers will, once again, host engagement boosting activation events at many of the tour stops. See you in the grandstands — can you cheer as loud as our brokers?

The 2019 WPCA Pro Tour kicks off with a lot on the line at the Grande Prairie Stompede — we know you, as race fans, already have your winning team picked. We all have our favourite chuckwagon driver.

Between May 29 and June 2, over 20,000 people are expected to pack the stands. The competition will be fierce — wagon drivers have their sights set on the $50,000 dash for cash.

“You want to come out of the gate ready to roll,” Bryan Hebson, WPCA marketing director, said.

Race night is thrilling for our Grande Prairie brokers — we’ve been supporting the WPCA for a decade. On June 1, find us in the crowd — we’ll be handing out goodies to chuckwagon fans.

“We’re united in front of a big crowd,” Tim Gassner, Western’s branch manager, said. “There’s a lot of pride we have representing our company … people get to see us out there with everybody else.”

Culture and history will come alive at the WPCA races in Saskatoon from June 6 to 9.

As the only Saskatchewan tour stop, visitors travel to the city from near and far. Each guest is eager to watch one of the most electrifying sports in western Canada.

Val Wasmuth, our North Battleford manager, will attend with her team — plus, Western brokers from Prince Albert, Nipawin, Melfort, Yorkton, Watrous, Rosetown among others.

“The crowds know Western; we’ve been there for years now,” she said.

The team represents Saskatchewan in its entirety — our brokers look forward to meeting newcomers and familiar faces. We’ll be decked out in cowboy hats and our finest duds.

“It’s awesome to see the Western name in a bigger centre,” Wasmuth said.

Fans are excited for the Medicine Hat Exhibition and Stampede from June 13 to 16.

For the drivers and their outriders, every race counts — there’s no room for penalties. Why? — the big money at the Ponoka Stampede (June 25 to July 1) and Calgary (July 5 to 14) lies ahead.

With summer at its zenith, High River residents are pumped for Guy Weadick Days. The event, named after the legendary cowboy and promoter of the Calgary Stampede, is one you won’t forget.

“The grandstand, it’s aluminum seating,” Hebson said. “When the wagons come around, the fans are stomping their feet. It gets pretty electric.”

Guy Weadick Days starts June 20 and ends June 23. Our Western High River brokers will be in the stands — don’t forget to visit us on our sponsored evening, June 22. We can’t wait to meet you.

“When you have a company that gets involved, hosts BBQs and shows they care about the sport and the investment, that’s pretty cool,” he said.

One phrase says it all — the Battle of the North. Drivers will descend upon Dawson Creek, British Columbia from August 7 to 11. BC fans, this is your moment to see the chuckwagons.

Last year, kids made signs for the drivers — a true sign of passion for the sport.

Western team members from both our Dawson Creek brokerages will attend the night of August 10. Jennifer Combres, branch manager, said the team is eager to hand out promo items.

“It’s always a good vibe in the stands,” she said. “People are excited to watch the races.”

This year, the stakes are high in Rocky Mountain House from August 15 to 18 — it’s the last qualifiers for the playoffs at Century Downs. You won’t want to miss out as the drivers make that push to the finals.

New this year, the finals will take place at the Century Downs Racetrack and Casino in Calgary. This event, held from August 21 to 25, is the championship the sport needed, Hebson said.

The 4 drivers in the Century Downs "Winners' Zone" Championship Dash will be racing for $50,000, a horse trailer valued at over $30,000 — the winner also gets bragging rights.

A full house is anticipated, and you better believe our teams will be there. A first ever world championship chuckwagon event, Western wouldn’t miss it.