What is the Impact of Solar Flares? 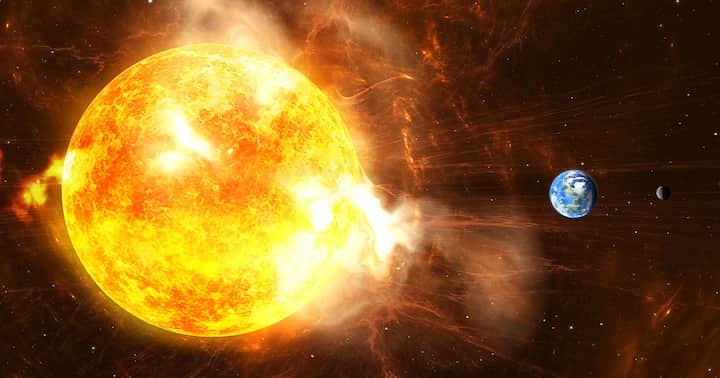 At 11:35 a.m. EDT, on October 28, 2021, an X1 solar flare launched a coronal mass ejection into space in the Earth’s direction. It is likely to create a geomagnetic storm when it reaches Earth on October 30 or 31. The solar flare caused a temporary but strong radio blackout in South America, which was the sunlit part of the planet at the time.

What are solar flares?

Solar flares are bursts of radiation from the Sun. They happen when there is a sudden release of magnetic energy that has built up in the solar atmosphere and include radiation across most of the electromagnetic spectrum, from radio waves to gamma rays. They extend out of the outermost atmosphere of the Sun, the corona, and can launch coronal mass ejections, which are huge releases of material and energy.

How do you classify solar flares?

Solar flares are classified using a system of letters and numbers. A, B, and C-class flares are the weakest, M-class storms are moderately strong, and X-class storms are the most intense. According to NASA, “...the number provides more information about its strength. An X2 is twice as intense as an X1. An X3 is three times as intense, etc. Flares that are classified X10 or stronger are considered unusually intense.”

How do solar flares impact us?

So, what can we expect to happen because of this solar flare? Northern lights! When charged particles from the Sun cause atoms in Earth’s atmosphere to glow with colours forming auroras. According to spaceweatherlive.com, the flare could “make aurora visible from locations like northern Germany, the Netherlands and most of England. In the USA, aurora might become visible from locations like Denver, CO and Richmond, VA. Melbourne and Wellington could get a piece of the cake in the southern hemisphere.”

Though they cannot physically harm us, the potential downside of solar flares is interference with satellite-based communications. According to Global News, “The storm will impact the highest levels of Earth’s atmosphere, which could potentially increase the drag on low-orbit spacecraft. The particles can also disrupt satellite orientation, which could then impact functionality on Earth. High-frequency communications like aviation air-to-ground communications and amateur radio are likely to be affected by the storm. Even services like GPS may be skewed or interrupted.”